February 18, 2013
I found some FAB fleur-de-lis pieces for my apartment today!! I'm usually scared to buy so many items when they're final sale, but I really think these will be perfect:
(I found all of these on Joss & Main - you have to be a member to see all their cute home decor, but I have a free invite you can use: www.jossandmain.com/invite/LaLawBlonde)

I think these bookends will be cute in my apartment! I paid $38.95 for the pair on Joss & Main 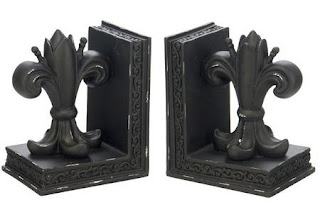 I can't wait for everything to get here and get it all set up!!!

Popular posts from this blog

Now you can shop my style!

March 15, 2019
I will be posting shoppable links to my looks here:  Shopping, Sprinkles Style!
Post a Comment
Read more
January 07, 2013
@ the office 11 pm. BCS National Championship Game is over. Cheers to that. I lean SEC, but my Bama hate is pretty palpable. I enjoy that they're elephants - SO cute, but that's about it. And I did almost go to law school there. Oh, & houndstooth is basically a school color. That's as far as this love  un-hateful fest is going. (I'm a Texas fan! I can't love Bama. but I guess I can love cute elephants) Listening to Lana Del Rey, getting a Girls Season 2 vibe from this one:   pretty dumb name for a song if you asked me (that's right you didn't.)  but I still likey. I get a Shosh vibe from some of the lyrics (not so much the music - needs to be cheetah-fast and winning at kickboxing class for me to hear Shosh), a little of everybody else too #SoPumpedForSeasonTwo #MaybeThisIsWhyMyWorkIsn'tFinishedYet
Post a Comment
Read more
January 21, 2013
In Search of:  Dog-Friendly New Orleans So. There's this awesome Mardi Gras parade in New Orleans called Barkus - here  is their website. When I was at Tulane, I went and watched the parade every year.  Finally, for the first time ever, I am going to take my pup down to Nola to march in the parade. I'm WAY too excited about this.  In planning my trip, however, I have found that there aren't that many nice hotels that will let your doggy stay with you.  Many hotels don't even list their pet policy on their website, so I've called and emailed several. Posting my findings here so I don't have to do this all over again in the future & thought it might help someone else!  Dog Policies (as of 1/21/13) Hilton St. Charles Ave: Dogs Allowed. $75 fee Olivier House: only a certain number of Dogs allowed in the hotel at one time. No extra charge Hotel Monteleone: Dogs Allowed. $100 fee per stay + $25 per night pet rate Bienville: sister property of the M
Post a Comment
Read more